Full Color Ocean to Outerspace Side Piece by Terry Ribera

Just wrapped up this Full Color Ocean to Outerspace Side Piece on Dylan. He sat like a champ. It was super fun and I’d love to tattoo more things like this in the future. Also tomorrow night at 8pm is our Gand Re-Opening Party at our new location.  Come join us for drinks, art prizes and donate a canned food item to Mamma’s Kitchen and help feed the homeless. 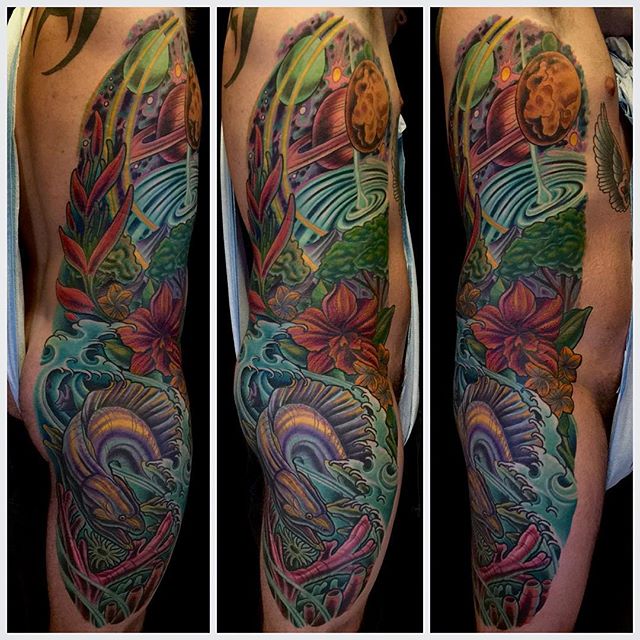 I started tattooing in 2001. I started my career at Tahiti Felix’s Master Tattoo in San Diego. The shop was originally established in 1949. During this time my interest really developed in large scale tattooing. The shop however was a traditional American tattoo shop, where I learned to tattoo on sailors, marines and learned the ropes of tattooing along side old timers Such as Maurice and Hiro Lynch.

Over the years, I have worked in many of the world recognized tattoo shops such as Avalon Tattoo II in San Diego, Memoir Tattoo in Los Angels and Dare Devil Tattoo in NYC. During the Last 13 years, I have focused most of my career on illustrative tattooing. My interest in large scale custom tattooing has taken me across the country and made me an internationally recognized tattoo artist. I have been published in Many of the industries top Tattoo Publications such as International Tattoo, Tattoo Artist Magazine, Tattoo, Flash, Savage, Inked, Tattoo Planet, Tattoo Life, Tattoo Energy and Total Tattoo.

My interest in Art Nouveau, Illustratitive Tattoo work, Biomechanical, Japanese and Asian tattooing has allowed me to grow as an artist and become one of San Diego’s Best Tattoo artist. My distinct and instantly recognizable style has been a culmination of many years of hard work and study. Today, I spend much of my free time Painting in Oil and showing my work in Various Galleries across the country.

You are here: Home / Latest Work / Full Color Ocean to Outerspace Side Piece by Terry Ribera