Neptune was the name that ancient Romans gave to the Greek god of the sea and earthquakes, Poseidon. He was the brother of Jupiter (Zeus) and of Pluto (Hades). After the defeat of their father Saturn (Cronos), the three brothers divided the world in three parts to be ruled by one of the three brothers. Jupiter took the sky, Neptune the sea and Pluto the underworld. Neptune had the reputation for having a violent temper. Tempests and earthquakes were a reflection of his furious rage. He was depicted as a bearded men holding a trident and seated in a seashell drawn by sea-horses. 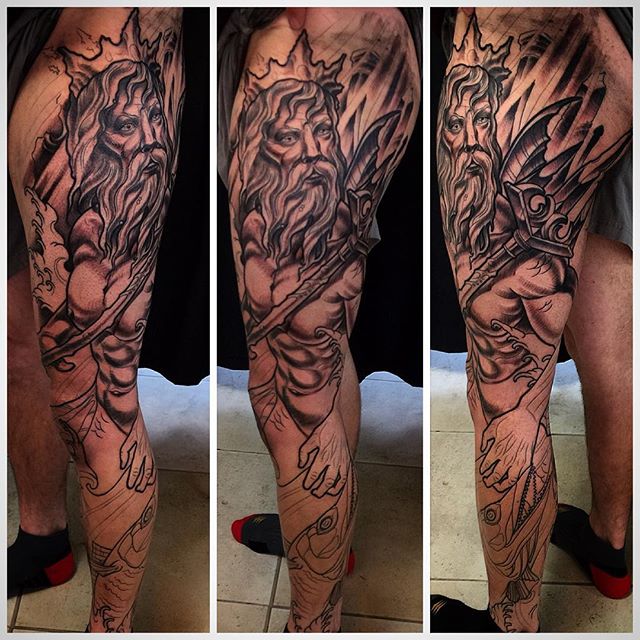 The consultation consist of us discussing your ideas and making measurements. Typically i need an 1.5-2 hours of your time. Hence why it takes so long to book as I already have 1 year of clients ahead. The process during the consultation is a drawing during the consultation, however it is merely to help visually explain layout, restrictions based on location and how a tattoo ages. The rough sketch serves as a visual guide for me and it will also provide for you a fair idea of what the tattoo will look like. It will not be a tight rendered completed drawing. If you would like a copy of the rough sketch that can be provided, however only after the deposit has been paid and an appointment is booked. Final art will be presented only a few days before the actual appointment, most of the details will be discussed during the consultation. The final art if there are any revisions they are made on the appointment date, as most details would have been discussed and made clear prior to that date so any revisions would most likely be minor if any at all. Ultimately you need to be confident in choosing who tattoos you. I am extremely honest about the technical aspects of what makes a tattoo read well, age well and I always encourage conscious compositional choices as clients often do not understand the long term issues often involved with tattooing. It’s my goal to be clear, show them how to best achieve their concept in away that lends hand to what I feel to be good tattooing.

I’ve been tattooing for over a decade at some of the best San Diego tattoo shops. I’ve been very lucky to have worked with amazing artists who really became family. It was hard and a little scary finally deciding to open my own shop, however it’s always been a dream to someday reach this point in my career. Now that we’re open, I’m thankful, and happy. We opened our doors in North Park, July 2011. We fixed up the building, and I love the atmosphere of the neighborhood. The people in the area are into art and music, there are a lot of tattooed people, bicyclists and culture. There’s a lot of charm here. Many of the people who have come into our shop really look through our portfolios and often say thank you after coming in—which is really rare in tattooing! We are a small shop but we are passionate about tattooing, and its all about the quality. I would like to keep it that way.