When people think about tattoos, often, the first thing to come to mind are what are considered “traditional tattoos.” Think nautical-themed: anchors, ships, and mermaids; or pin-up illustrations of the female form, as well as hearts, roses, blades and animals. This type of imagery, coupled with bold, distinctive line work is associated with what is now deemed the traditional American tattoo style.

While tattooing is an ancient, time-honored tradition, practiced around the globe, at the time it was developed in the United States — in the 1930s — the country was in transition after the Great Depression.  Many had become disillusioned with the pursuit of the Great American Dream and completely at odds with the idea of propriety. Many had lost their jobs, and lost their lives, or loved ones to the war. In short, people were looking to mark themselves with something that signaled a new way of living.

During this period of time, there were a select bunch sporting tattoos. Sailors, drifters and outcasts (circus “freaks”, performers) and those who felt outside the reaches of acceptability, were among those who opted to ink their skin. 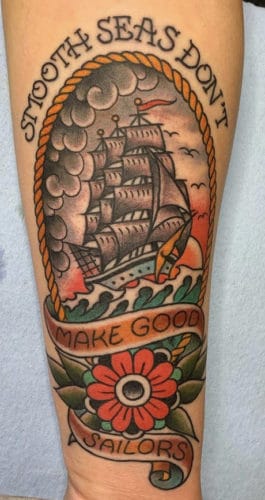 The Ones Who Started it All

Some of the early pioneers of this style include:

Norman Collins, (aka Sailor Jerry) — The lady on the rum bottle… that’s his design

Bert Grimm — Ran the oldest continually running shop in the continental US, and was the go-to for sailors to get inked 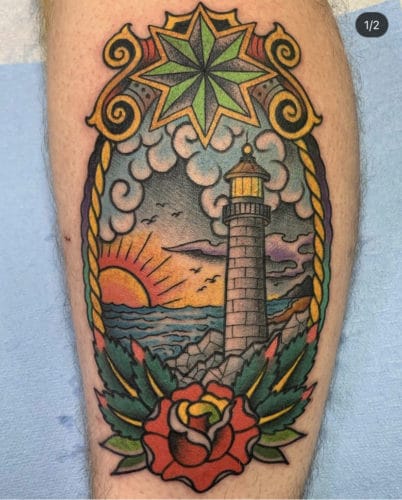 Features of a Traditional Tattoo

These early artists paved the way for many of the popular tattoo iterations we see today. For example, neo-traditional work (which should not be confused with “New School” tattooing)  often blends the traditional art form with contemporary elements. Neo-traditional is considered a revival and a celebration of the 1930s approach to body art. Typically, eo-traditional features a mix of heavier and lighter line weight along with some old school themes and imagery, but often features a much broader palette of colors.

If you love the classic look of the traditional style tattoo, you’re in good company — and the good news is many artists still practice this style. But, make sure you do your research and that you (and your artist) understand what sets this style apart. When shopping around for artists make sure to:

Check out their work online. Many artists have an Instagram page so you can see what type of work they like to do.

Pro-tip: It’s almost always better to go with an artist who truly loves to work in the style you’re hoping to have done, instead of hiring an artist who can do it, but maybe doesn’t love it.

Visit the shop and meet the artist. Make sure you like the vibe of both the shop and the artist because you’ll likely be sitting there for quite awhile!

Inquire about licenses and safety protocols. Make sure they are operating in accordance with OSHA and regulatory compliance.

Built in 1914 and restored in 2011, Remington Tattoo Parlor + Gallery is located in the North Park district, the heart of San Diego. Remington Tattoo Parlor is a combination of industrial/modern meets an apothecary/artist’s studio. Our unique shop’s aim is to create a memorable experience combining tradition and nostalgia with a modern, clean environment utilizing the best quality supplies and sterilization techniques.